By David Ehrlichman, Converge for Impact

The effectiveness of any collaborative group—whether a network or an organization—is highly dependent on the quality of connections that exist between the participants involved. Social network analysis (SNA), using mapping tools like Gephi or Kumu, is the most effective method available today for visualizing and evaluating group connectivity. Using SNA, we track three measures:

Using the data collected, SNA allows us to track and measure the connections that exist between participants, to strategically “weave” connections between individuals and strengthen collaboration across departments or organizations, and to increase the group’s collective self-awareness and ability to see the whole system.

For a deeper understanding of what SNA can provide, let’s first quickly review the components of a network map:

An edge is a bond or relationship that connects two individuals or organizations. Edges can be assigned a weight depending on the strength of the connection.

For two years Converge helped design, launch, and lead the New Leadership Network (NLN), a network of diverse, cross-sector leaders for community revitalization in Fresno, California funded by The James Irvine Foundation. The NLN cultivated a tight network of 48 community leaders to find common ground and collaborate together on critical community issues.

Getting the Whole System in the Room: Mapping the NLN by Sector

By graphing the strength and density of connections over time, network analysis can evaluate the health and growth of networks far more effectively than raw numbers or first-hand accounts.

We first mapped the New Leadership Network just before its launch in 2013, and continued to conduct follow-up mappings every 3 to 6 months thereafter. As the number and strength of connections grew the network analysis validated that our convening-based process designed to build a strong, trusting community of leaders was working. The network’s density was increasing (a ratio of the number of connections to the number of possible connections in the network), existing connections were getting stronger, and NLN leaders were “closing the triangle” and introducing mutual connections to each other.

We often reminded the NLN members that being on the periphery of a bounded network should not be seen as a negative; instead, these leaders are incredibly valuable to the rest of the network. Innovation does indeed come from the periphery, as it often provides access to new information and perspectives, as well as critical bridges to new networks that the core might otherwise not have a connection with.

However, we also knew the NLN would require representation across sectors and issue areas, such that we had the “whole system” in the room. Analyzing the network by issue area and sector allowed NLN leaders to clearly “see” what issues were represented, guiding their recruitment efforts accordingly. For example, the Network’s first cohort was primarily comprised of education and nonprofit leaders. Consequently, the NLN formulated a targeted recruitment strategy to attract more healthcare, government, and private sector leaders for cohorts 2 and 3. 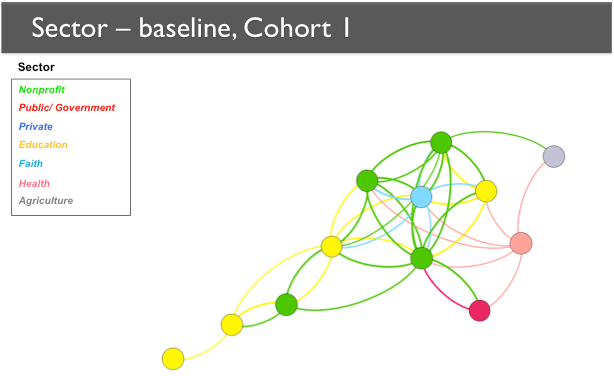 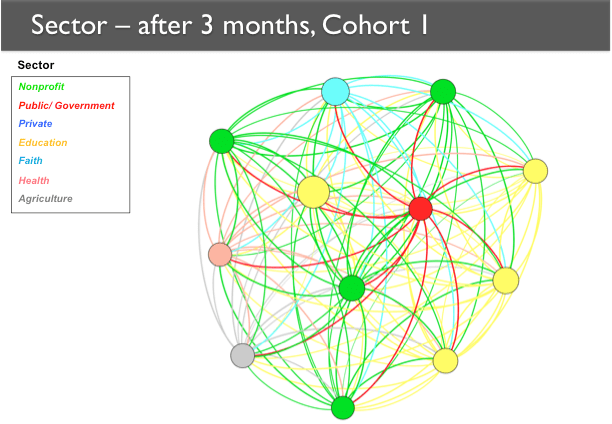 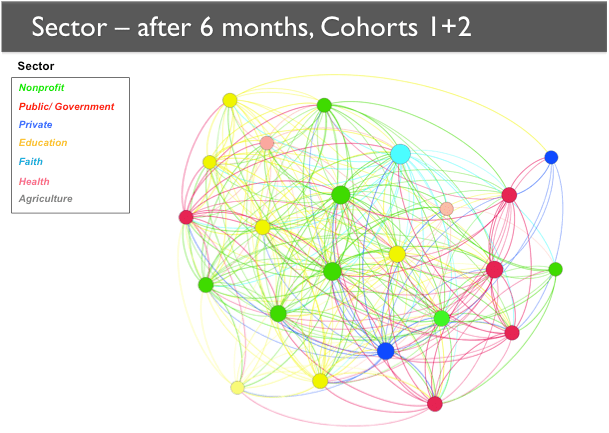 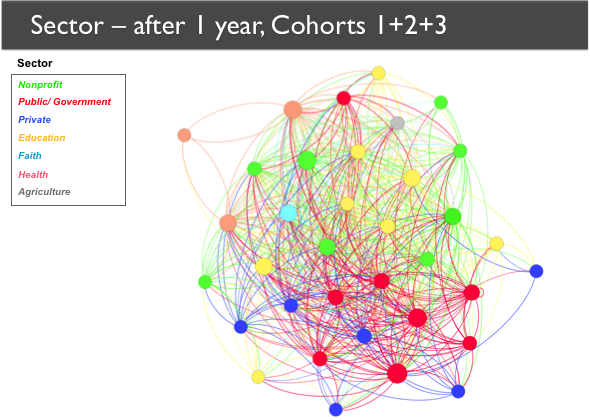 Weaving the Network for Maximum Connectivity: Mapping the NLN by Cohort

Our goal was never to build separate NLN cohorts, but to catalyze one larger highly connected network of leaders that had the capacity to create citywide change. Consequently, it was important for us to evaluate how well leaders were bonding across cohorts.

Our network analyses revealed that while leaders were tightly bonded within their own Cohort, we needed to invest more time and energy into weaving the cohorts together by connecting leaders across cohorts (particularly the leaders who were highly-connected hubs within their cohort).

As we started to integrate cohorts 1, 2 and 3 together, cohort 1 and 2 leaders were highly connected overall, but still fairly divided by cohort, while Cohort 3 leaders were on the periphery, with some struggling to form meaningful connections as the newest members. 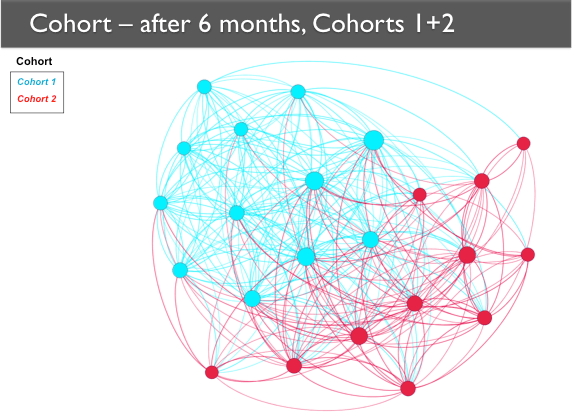 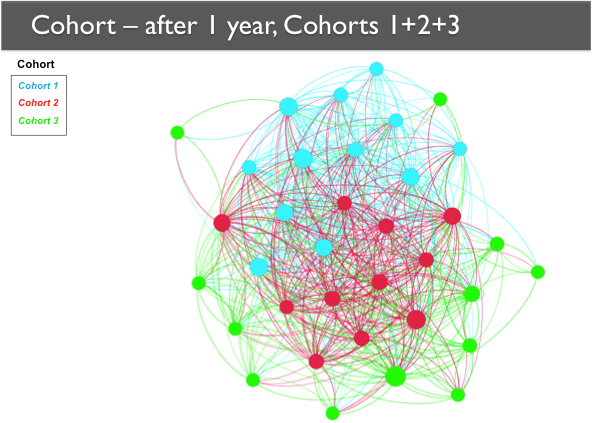 These findings informed our network weaving efforts, as we organized meetings between leaders who, based on the data, did not already share significant connections and whose bonding would most rapidly accelerate the density of connections across cohorts. The data also focused our process design to more rapidly integrate new members into the Network, and allowed us to assign seats and groupings at convenings based on existing connections.

Using a community-finding algorithm, we can also detect the “clusters” that exist in the network. Clusters are subgroups or “tribes” of individuals that are more highly connected to one another than others in the network.

Our analysis revealed three primary clusters evident in the NLN: 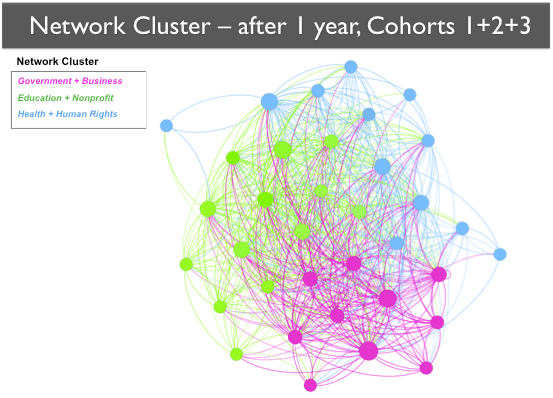 This validated what we learned in interviews with local leaders during our research phase prior to launching the NLN. We heard that government and business leaders often run together in close social and professional circles, while nonprofit and social sector leaders struggle to break into the power base.

It was revealing then, the day after we performed this cluster analysis, to see all the NLN government and business leaders sitting together at a single table during a network dinner meeting.

When we shared this network map with the NLN leaders (their version contained labels so they could identify themselves and other leaders on the map), they were visibly struck. While most understood intuitively that Fresno tended to operate within tight-knit silos, they had never seen analytical evidence that made it so clear.

Immediately, we saw government and business leaders reach outside their silo to connect with leaders in other clusters. Some leaders introduced friends on the periphery to more connected members in the center of the network. Those who wanted to form a closer relationship with a member of the network were able to identify a mutual connection that could make an introduction. The NLN suddenly “saw” itself in a new way, significantly increasing the group’s self-awareness.

David Ehrlichman is a founding partner of Converge, a network of thought-leaders and consultants with a shared interest in addressing problems that require dynamic collaboration among diverse actors— problems like protecting the environment or addressing the social determinants of health. With experts who have delved into problems across industries and in 13 countries, Converge has analyzed and built collaborative networks across a wide range of issue areas and sectors, from Fortune 50 companies to regional governments to activist groups. Their articles and webinars have also been prominently featured in leading publications of the social good space, including the Stanford Social Innovation Review.

This article originally appeared on the Converge for Impact blog.

This collection of resources on evaluation and measurement provides opportunities for rural health network leaders to build capacity within the strategic planning cycle of monitoring and adapting their network and program goals.